Items of interest for the Complaints, Accountability, Integrity Network

NT Anti-Corruption Integrity and Misconduct Commission Inquiry
An inquiry has been commenced into the establishment of an independent anti-corruption body in the Northern Territory. The Inquiry Commissioner Brain Martin AO QC has invited public submissions relevant to the terms of reference by 12 February 2016.
http://static.fairfaxrural.com.au/classifiedsimages/full/17292148.pdf

NT Consumer Affairs Smartphone apps
Territorians now have instant access to consumer affairs advice and support regarding their rights as tenants and as shoppers. It is now easier and quicker to deal with tenancy and consumer issues with the introduction of two new mobile smartphone apps, RentNT and ShopNT. The apps are available for both Android and Apple devices and offer information, advice and support on a range of tenancy and retail purchase issues (Apple links below).
ShopNT - https://itunes.apple.com/au/app/shopnt/id1011039228?mt=8
RentNT - https://itunes.apple.com/au/app/rentnt/id1053338307?mt=8 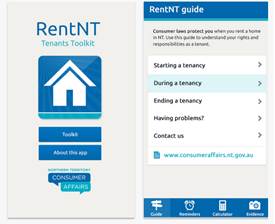 Reporting and investigation of allegations of abuse in the disability sector: Phase 2 – incident reporting
This report is the second part of an investigation into the reporting and investigation of allegations of abuse in the disability sector. The Phase 1 report concluded that the oversight system in Victoria is fundamentally failing to deliver protection in a consistent and coherent way. While Phase 1 focussed on systems; this investigation focused on incidents. The Ombudsman reviewed hundreds of individual incidents, and reached unambiguous conclusions. The person at the centre of the incident – the person with disability – is largely absent. Their voice is not recorded. There is a perception that it is not what has happened to them that matters but that forms are filled out and faxed within a prescribed timeframe. Feedback to service providers is ad hoc, and learning from incidents is not supported. The system itself relies on an archaic and inefficient transmission of paper via fax machines. This reveals a way of thinking about people and disability that is at odds with the equal application of human rights, which would demand that the systems support the people and not the other way round.
https://www.ombudsman.vic.gov.au/getattachment/45e28c63-24b0-4efd-b313-85f4f6e44d3f//publications/parliamentary-reports/disability-sector-phase-2.aspx
Ombudsman Victoria, December 2015

The Lakeside Noise Report: An investigation of action taken by Moreton Bay Regional Council to regulate noise emissions from Lakeside Motor Racing Circuit
The report outlines the findings of an investigation of action taken by a council in response to ongoing issues regarding the emission of noise from a motor racing circuit. The investigation found that the council had not taken effective steps to collect data, and monitor and evaluate noise levels from events or to protect the community from potential noise exceedances arising from events.
http://www.ombudsman.qld.gov.au/Portals/0/docs/Publications/Inv_reports/Lakeside%20Noise%20Report%20FINAL.pdf
Queensland Ombudsman, November 2015

Department of the Premier and Cabinet – Tender process
The report considered whether departmental officers committed misconduct or an act of maladministration in public administration in making a trip to New Zealand with an incumbent supplier during a tender process. On balance, the Ombudsman concluded that the officers concerned exercised sufficient caution so as not to prejudice the probity of the procurement process. They did not breach relevant policies and codes. Nor did they fail in their responsibilities or duties as public officers. In saying this and while acknowledging the challenges that the Office of the Chief Information Officer faces in dealing with incumbent and potential suppliers when they are in a procurement process, in this instance, the Ombudsman considered that two officers could have been more circumspect about the appearance of favouritism in the New Zealand trip.
http://www.ombudsman.sa.gov.au/wp-content/uploads/Department-of-the-Premier-and-Cabinet-R-Tender-Process.pdf
Ombudsman South Australia, June 2015

Investigation into 2008 national school bus transport tender process
A report by the New Zealand Ombudsman that identifies various issues with tender processes undertaken by the Ministry of Education relating to a Request for Proposals for School Bus Services, including failure to adequately notify changes to the tender.
http://www.ombudsman.parliament.nz/system/paperclip/document_files/document_files/1039/original/280050_investigation_into_2008_national_school_bus_transport_tender_process.pdf?1439416527
Ombudsman NZ, June 2015

Australia and New Zealand Ombudsman Association biennial conference, May 2016, Melbourne
ANZOA's biennial conferences are an important source of continuing professional development for Ombudsmen and their staff. Each conference also provides a space where Ombudsmen - and those in government, regulation, industry, academia and the consumer sector, who are interested in the institution of Ombudsman - can discuss and reflect on current issues and challenges in the evolution of the Ombudsman role.
http://www.anzoa.com.au/2016-conference.html

Provision of a link in CAIN updates is not an endorsement of a website or a publication. Readers must make up their own minds about the value of any information provided or views expressed.